In some barracks of the Soviet Army in Germany, apart from monuments in honour of Lenin, some quotes from the revolutionary leader can still be found. Like the statues, busts and reliefs, the inscriptions are also highly endangered and are gradually disappearing as a result of conversion processes, the atmospheric conditions or acts of vandalism. Here are the last remaining quotations of Lenin in former installations of the Group of Soviet Forces in Germany:

DRÖGEN/FÜRSTENBERG
In Drögen near Fürstenberg, two Soviet relief walls have endured. On one of them two quotes of Lenin are reproduced. On the front it says: „Impossible to make the country defensible without the greatest heroism of the people, who fearlessly and resolutely realise the great economic overthrows.“

On the back is Lenin’s head and next to it the sentence „The Party is the spirit, the honour and the conscience of our epoch.“

In the buildings of the former barracks in Forst Zinna there are still some billboards with quotations of Lenin. One poster has Lenin’s portrait and the sentence: „The organization of competition should be one of the most important and noble tasks of the reorganization of society.“

In the same building there are two other placards with sentences of Lenin. 1) „In our steps towards peace we must at the same time keep all our military forces in readiness.“ The sentence is taken from a speech of Lenin in March/April 1920, in which he warns against hasty disarmament in view of the threat of further attacks on socialist Russia.

2) „Where the political work among the troops and the work of the commissars is carried out most carefully, there is no sloppiness in the army, its order and spirit are better, there are more victories.“ The sentence is from a text by Lenin in 1919, that is, during the Red Army’s war for the defense of the revolution against the tsarist White Army and its international allies.

In another building, a quote from 1905 can be found on a larger plaque: „Neither in peacetime nor in wartime should we forget the training of recruits, shooting learning, the spread of the abc of warfare to the masses in breadth and in depth.“ 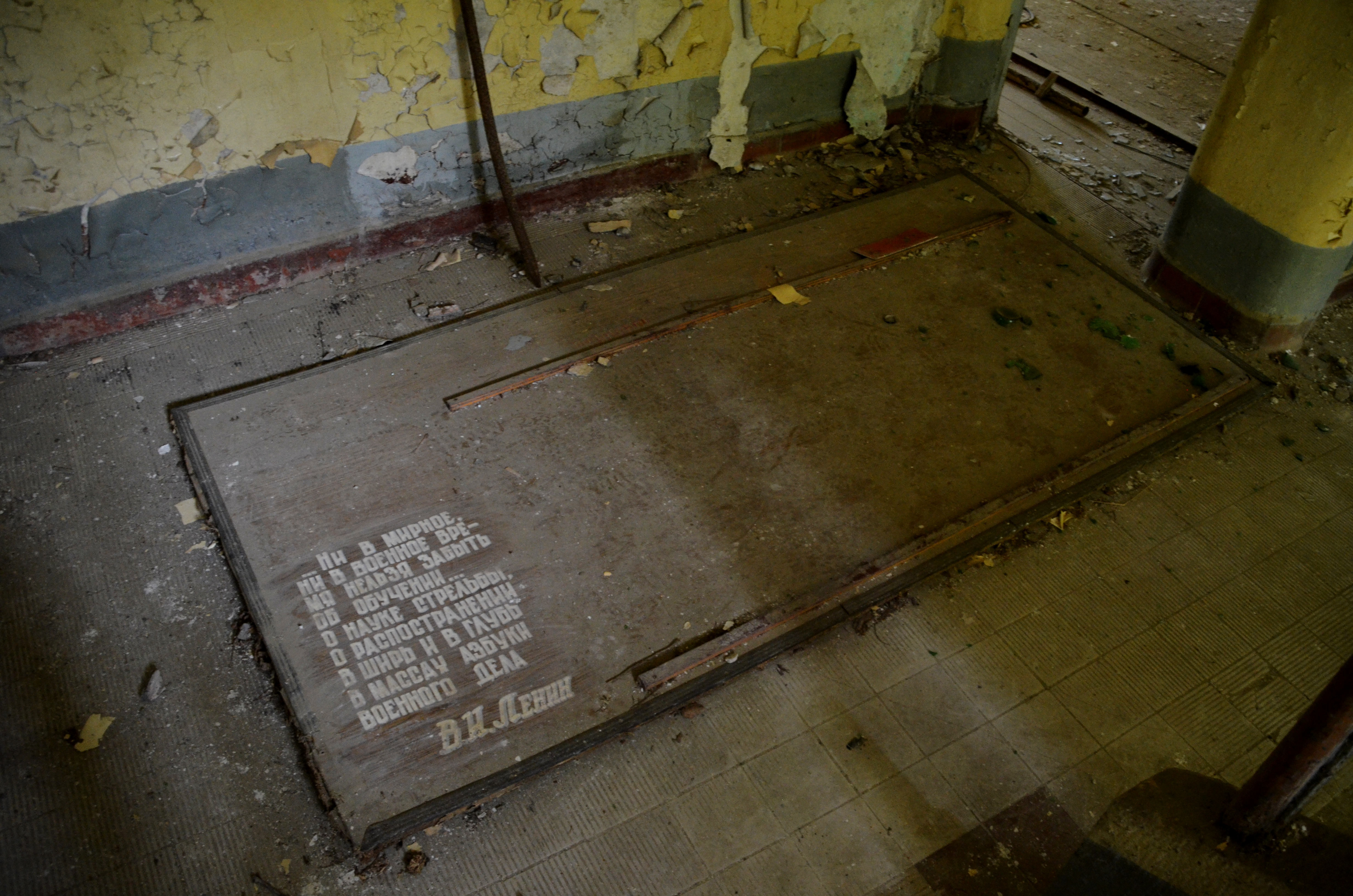 KÖTHEN
At the former airfield in Köthen, the following sentence of Lenin’s is inscribed on the façade of a hangar: „Our maxim is to learn the military seriously.“ 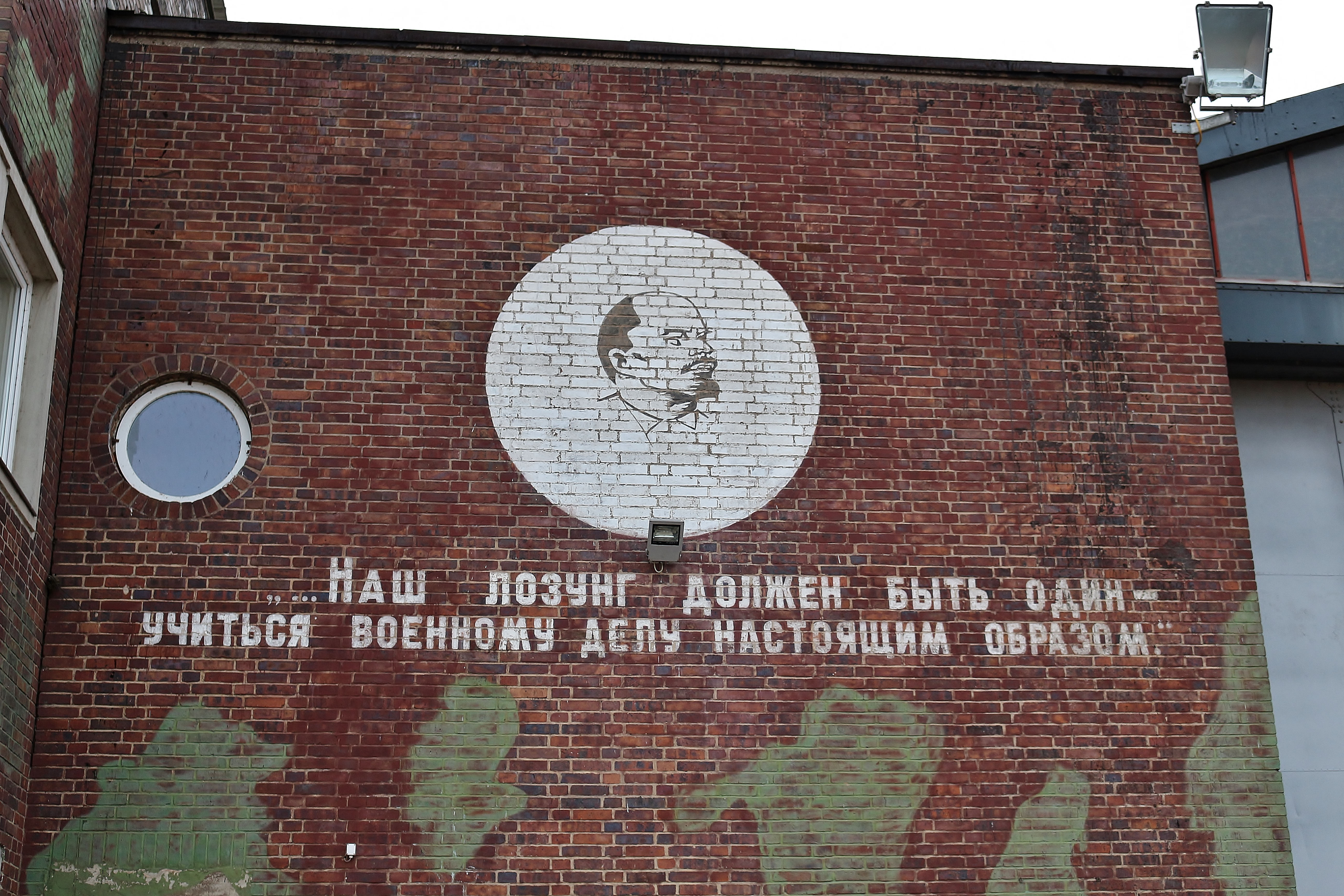 VOGELSANG
In the school of the military facility in Vogelsang, one can also still find a quote by the Soviet revolutionary. The beginning of the sentence has now unfortunately disappeared: „The human mind has discovered many special things in nature and will open up even more, increasing its power over them.“ Photos from 2015 and 2020: 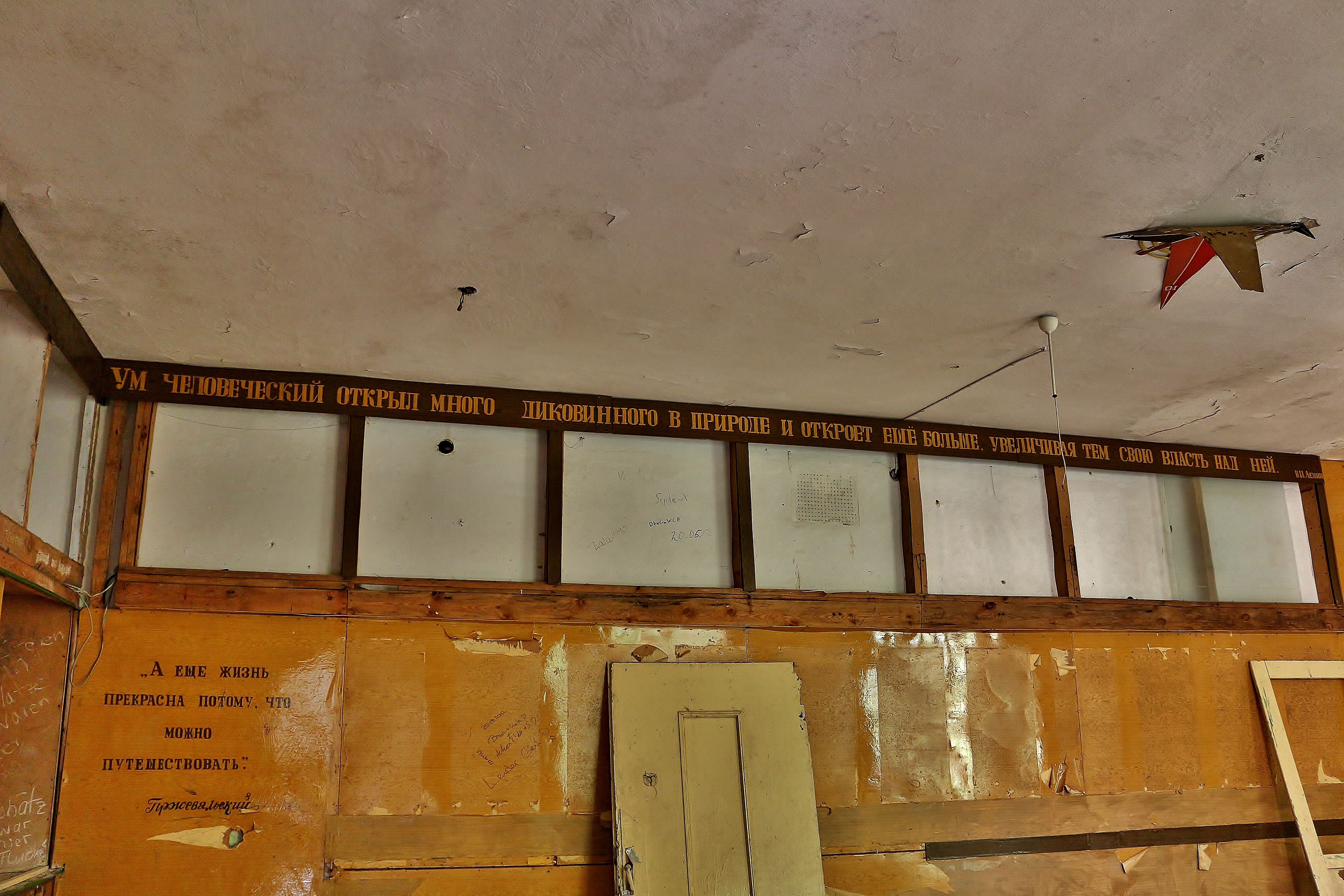 PÜTNITZ
In a hall of the military airport in Pütnitz (Ribnitz-Damgarten) a Leninian slogan has been preserved: “ The one who has the best technique, organisation, discipline and machinery wins.“ 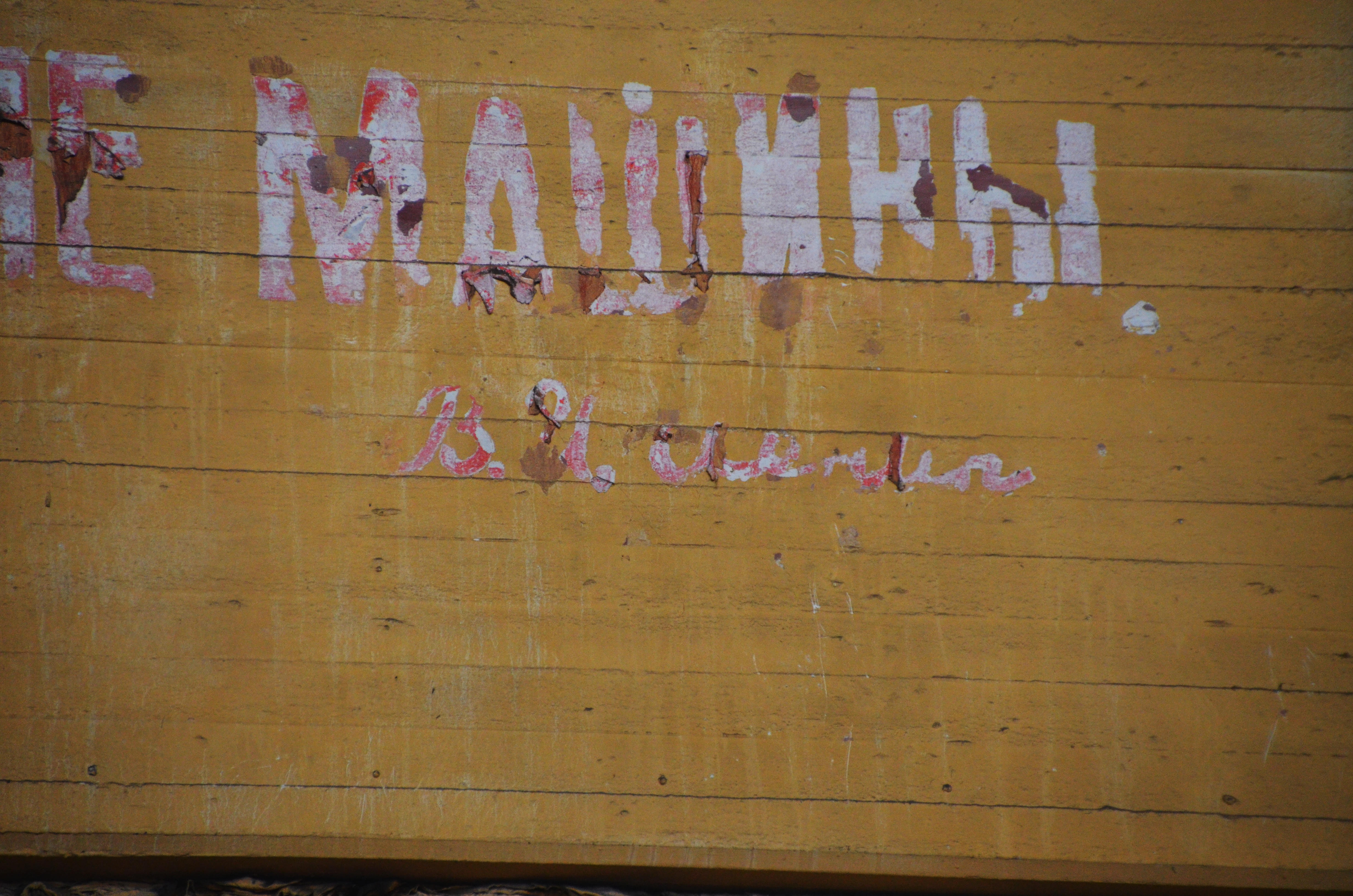 In a theatre or conference room of the former airfield still hangs a motto by Lenin: „Learn military affairs – in a serious way.“

At the abandoned theatre in the former ammunition depot in Kapen, two small passages from texts by Lenin are pointed out on a panel. The first, according to our research, is from a Pravda article published in January 1921: „All the affairs of the party are conducted directly or through its representatives by the party members, with equal rights and without exception.“ The second sentence can be found in German in Lenin’s Works vol. 5, p. 380: „[The] role of the pioneer [can] be fulfilled only by a party guided by an advanced theory.“ 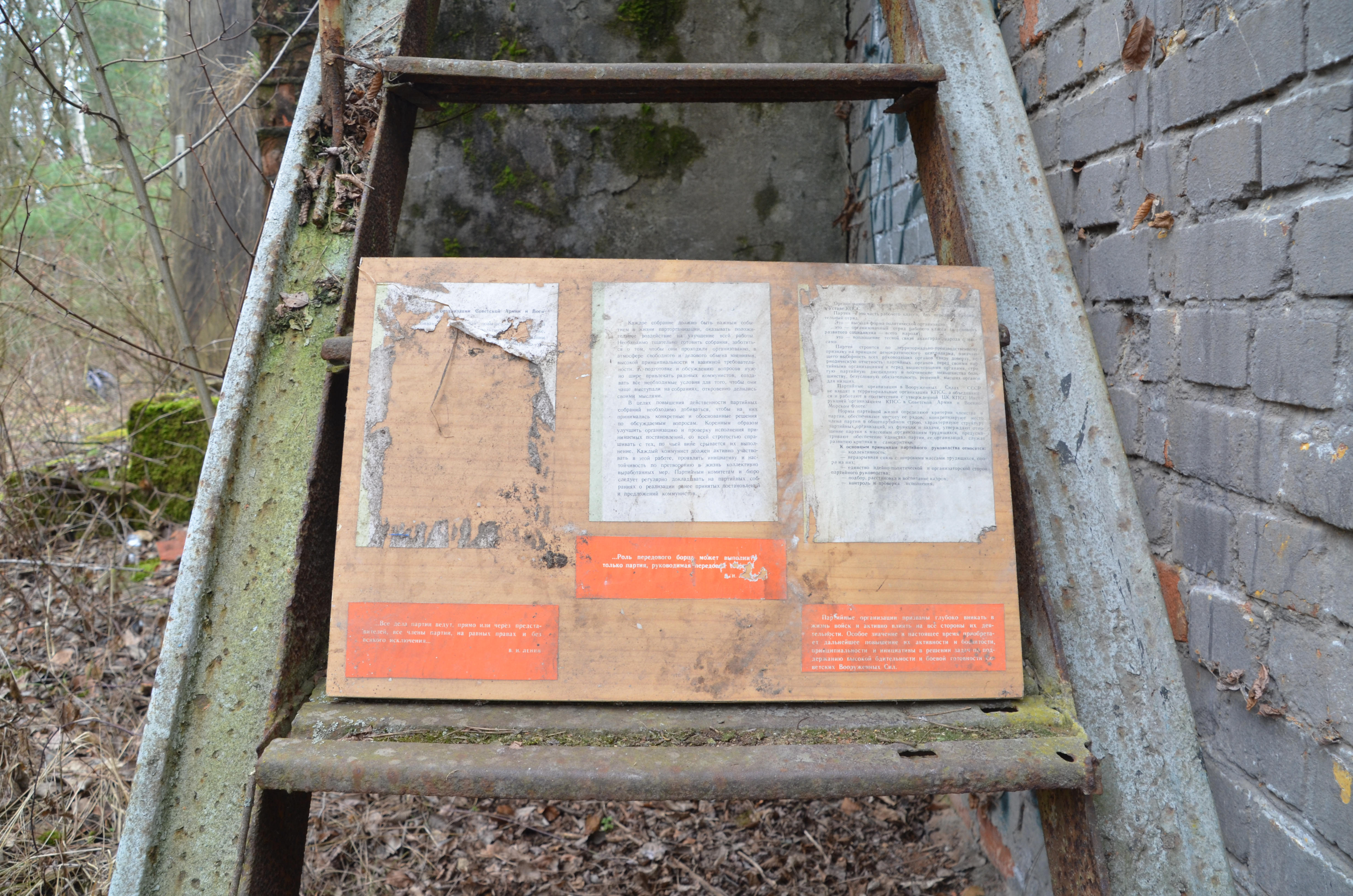 MÖHLAU
At the barracks in Möhlau, above a door in an office building, there is a quote from Lenin on red cloth: „To win, you need iron military discipline.“ 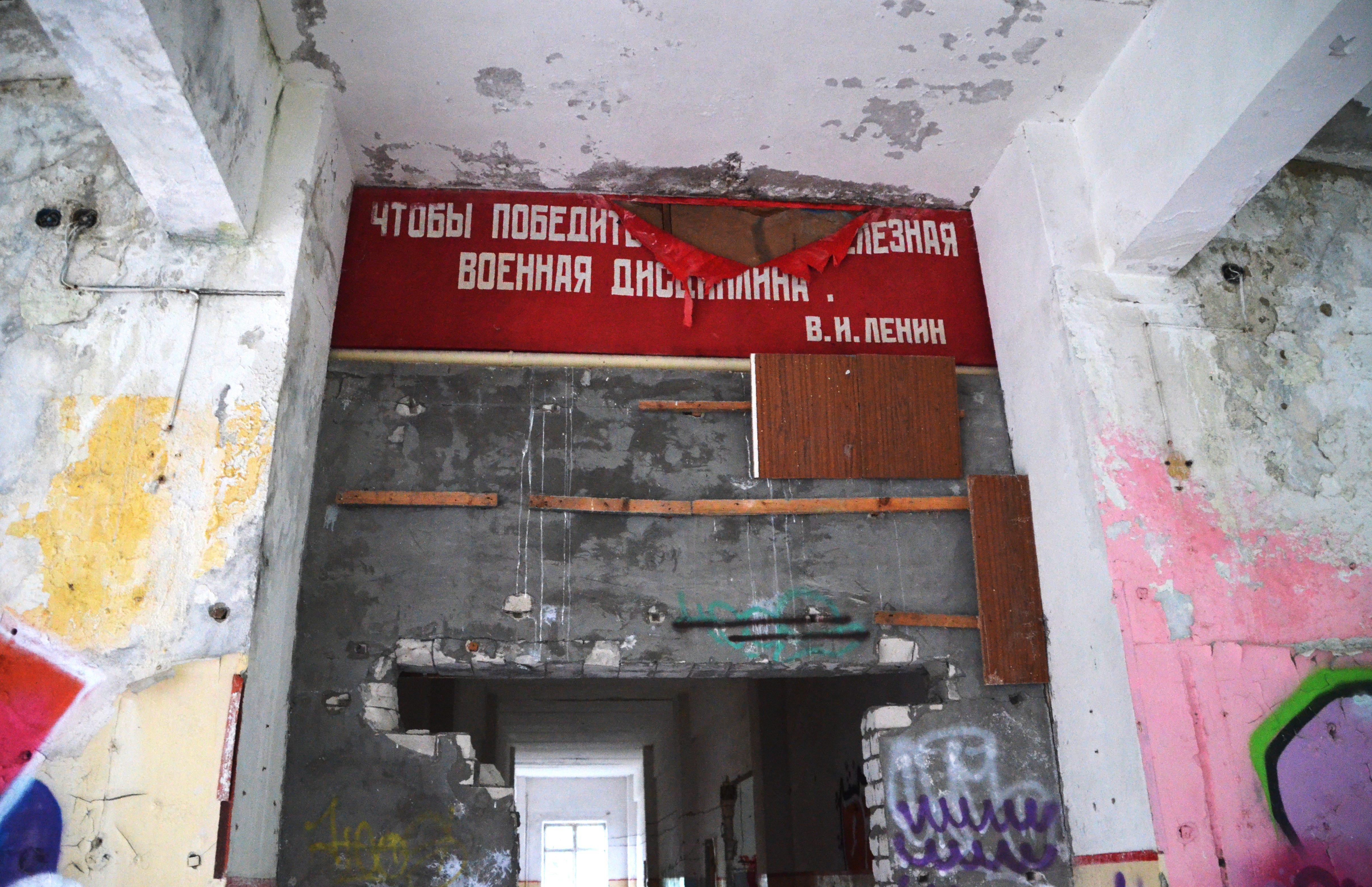 Two other sentences by the communist leader on the Möhlau site have meanwhile disappeared: „Art belongs to the people“ hung in the theatre, which was completely burnt down. It was an exerpt from a reflection by Lenin on art and the masses: „Art belongs to the people. It must have its deepest roots in the thickness of the broad working masses. It must be understood by the masses and loved by them.“ (Special thanks to Patrick Stern for the picture of the Lenin quote before the fire.) 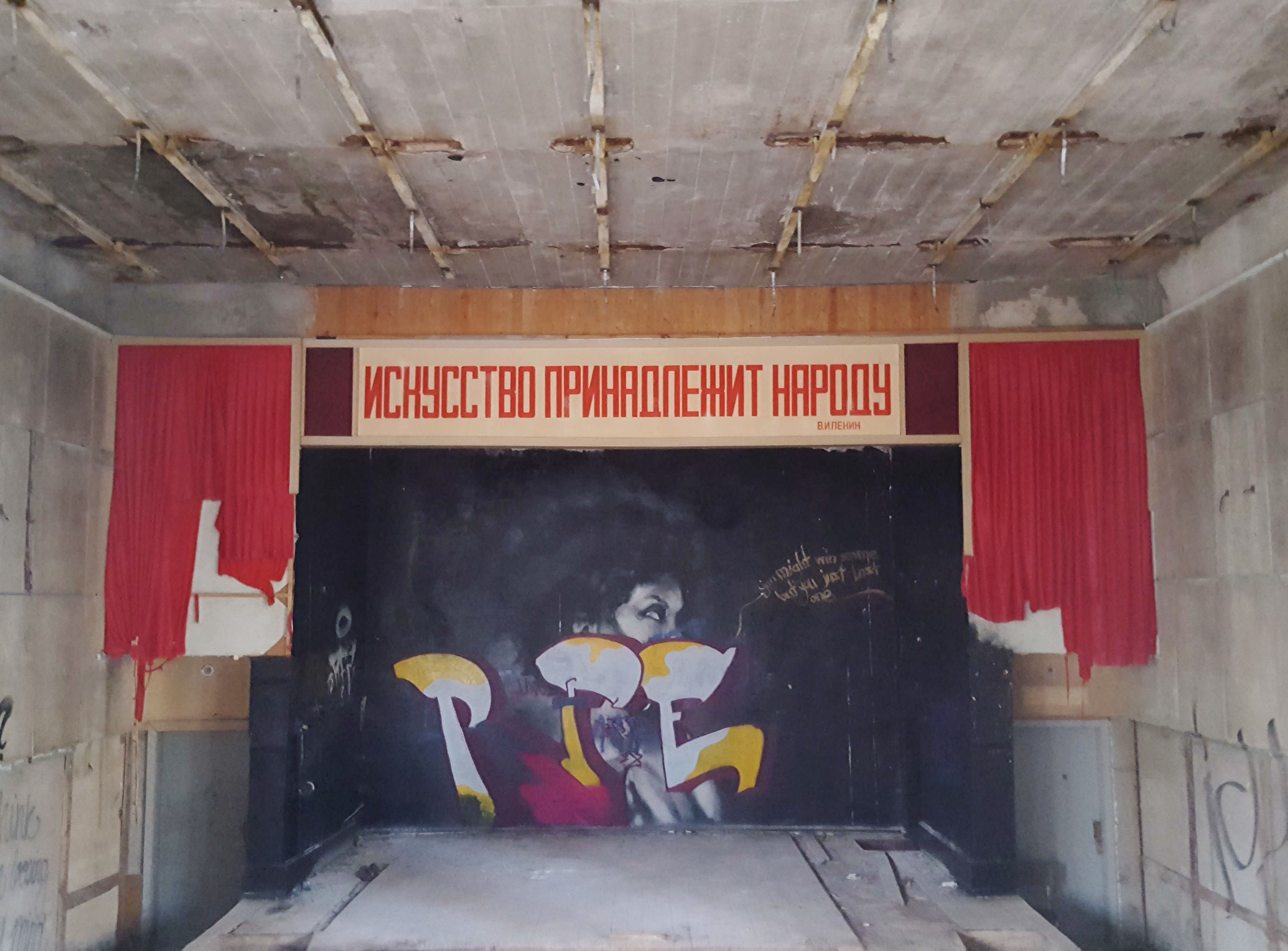 On the now badly deteriorated relief-wall next to the theatre building was another motto of the founder of the Soviet Union: „In the army the strictest discipline is required.“ 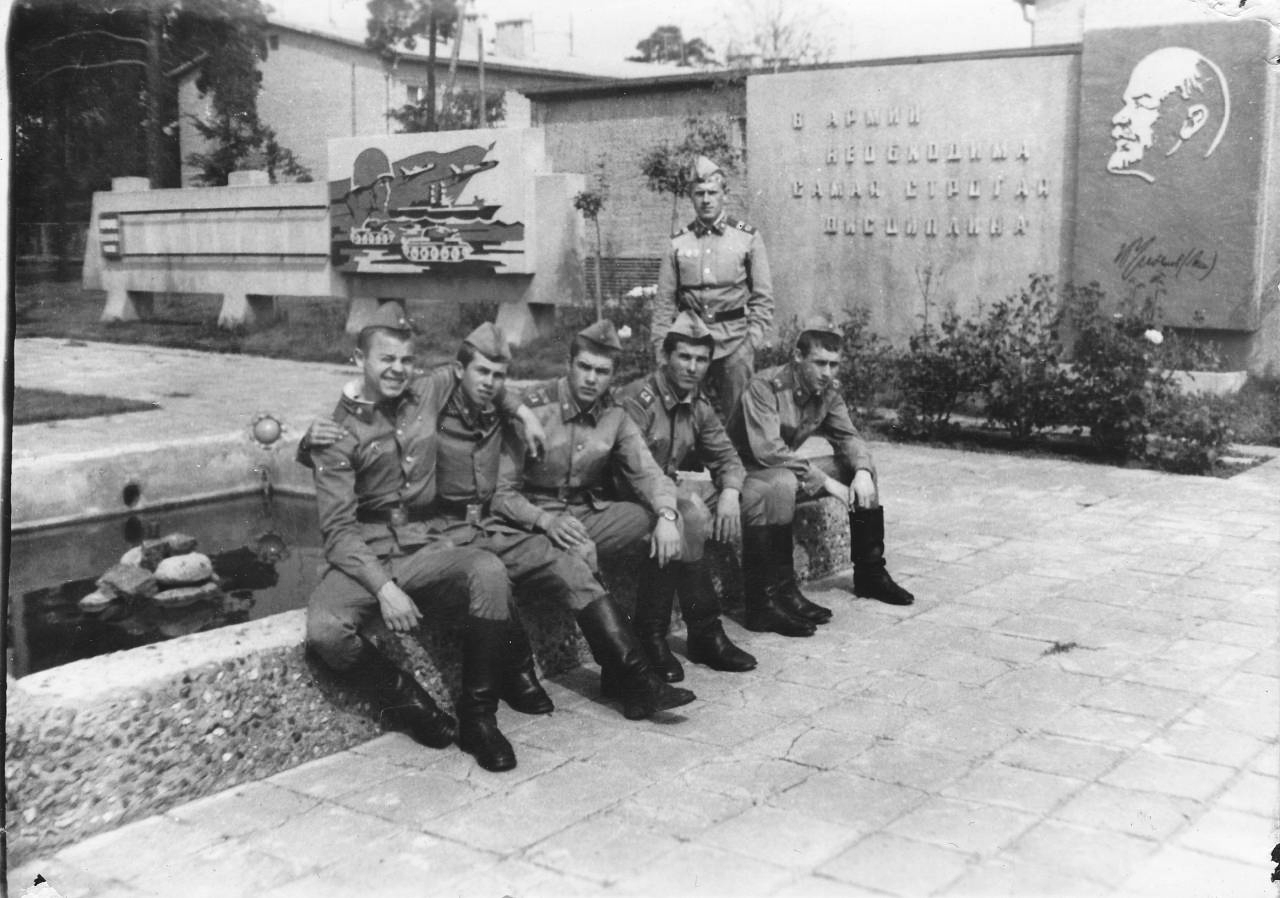